To Excellence and Beyond 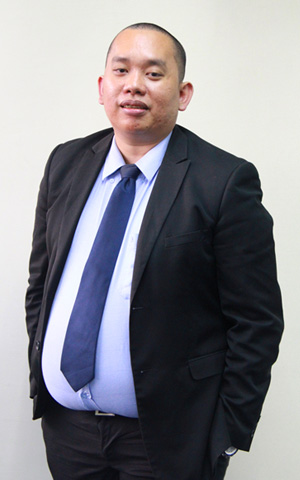 As a child, Richard wanted to be an astronaut and explore new things in the vast outer space. When he grew up, he became an IT Consultant, spending his time identifying various IT solutions and sharing his knowledge to other people at the same time.

Richard Gadin lived most of his childhood life in Camarines Norte with his father who worked as a meat shop owner at the wet market, and his mother who was a public school elementary teacher. Though the shop has been with the family for two generations already, their father has repeatedly encouraged him and his siblings to dream big and pursue other careers instead of continuing the family business. Since their mother was a teacher, their family valued education with high regard, but still not as important as family.

He was taking a Major in Accountancy at a different university then his father fell ill. Richard took it upon himself to stop school so he could take care of his father for one year, which turned out to be the last one they will ever be spending together. This episode took him to a different turn in his life. When Richard went back to college, he found himself taking a completely different course with BS Computer Science at STI, discovering his passion and thirst to know more about programming.

Richard spent eight years of his life taking on various jobs such as working at a call center, selling credit cards, and teaching an NSTP subject for high school students just to make ends meet. It was until he realized that a job in the IT industry is what he really wanted to pursue, and co-founded Go! Go! Pinoy where he builds business applications, finally establishing himself a career he revels in.

Looking back on the things he went through, Richard would like to remind the students today that learning many things is more important than the salary size. Sharing from his experiences, the bigger problems to solve, much can be learned, and higher will be earned. In the end, even if he did not grow up to be the astronaut to land on the moon, he has successfully landed in a career he enjoys doing the most.