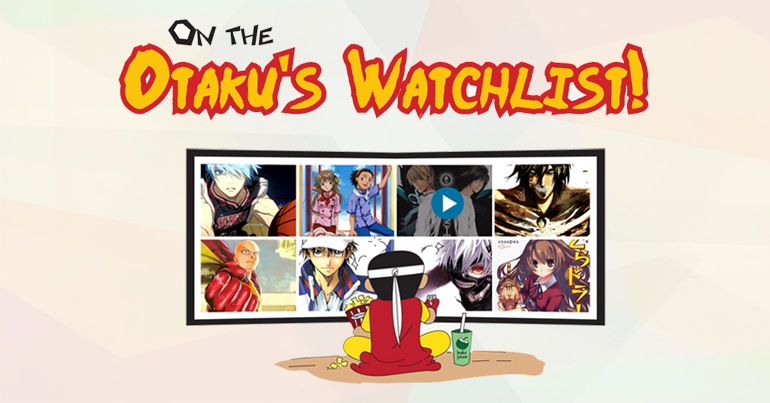 The Animes You Should Be Watching

Whether your guilty pleasure is binge-watching or you are just looking to get into anime, this season is the perfect opportunity for you to get lost in the exciting worlds and stories of these fantastic animated series.

These four shows are guaranteed to entertain, inspire, and possibly even move you to learn a thing or two! So what are you waiting for? ("Dozo!" translation: “Go ahead!”)


Want to sweat it out? Haikyuu!! will excite you to get active with its unbelievable plays, lovable characters, and engrossing storyline. If you’re no volleyball fan, then this anime might just turn you into one. Haikyuu!! centers on Shouyo Hinata, a short but energetic 15-year-old, who aspires to be like his idol, the Little Giant, one of the best volleyball players in Japan despite his small stature. He eventually joined his idol’s high school volleyball team in Karasuno High School, where he crosses paths with his middle school rival and meets his colorful teammates who will help him in his journey to get to the Nationals of the Inter-High School Volleyball competition.

That’s just a warm-up! If you want more, you can watch: Kuroko's Basketball, Yowamushi Pedal, Free! Iwatobi Swim Club, and Prince of Tennis.


A modern classic set in a universe where alchemy exists as one of the most advanced sciences, Fullmetal Alchemist (FMA) follows brothers Edward and Alphonse Elric in their search for the Philosopher’s Stone to restore their bodies after a failed attempt to resurrect their mother. Wondering which version you should watch? Go for both the 2003 version and Brotherhood to appreciate the story even more. It’s one thrilling ride that will have you at the edge of your seat and leave you with a great impression. It’s no wonder that FMA is a fan favorite among many anime fans all over the world. Now is the best time to watch this series before the live action movie is released in the cinemas!

If you enjoyed this, you’ll like: Hunter x Hunter, Death Note, Attack on Titan, and Tokyo Ghoul.


Abandoned by his restaurateur father to explore the world, Yukihara Souma enters the prestigious Tootski Culinary Academy where it’s every cook for himself and it’s the survival of the yummiest dish. Food Wars! is what you’ll get when you put Iron Chef in a school setting. With most of its comedy coming from the judges’ extreme reactions after tasting the food, Food Wars! is one show you shouldn’t watch on an empty stomach. Not to mention, now is your chance to catch up before season 2 starts!


When Chiyo Sakura confessed to her crush, Umetaro Nozaki, she didn’t think that she will be receiving an autograph from Sakiko Yumeno, a famous romance mangaka and the alter-ego of her tall, dark, and manly crush. She gets roped into Nozaki’s world and meets the people that inspired the characters and events in his story. Monthly Girls’ Nozaki-kun is full of laugh out loud moments as we get to see the typical gender roles flipped. Aside from the comedy, the relationship dynamics in this show shines! We won’t blame you if you even start shipping or pairing characters along the way!

Looking for more laugh-trips this summer? Take a look at: One Punch Man, Daily Lives of High School Boys, The Devil is a Part-timer, and Gintama.

Otaku – a Japanese term for someone passionate about their interests & hobbies; usually pertains to fans of anime and/or manga.

Binge-watch – to watch episodes of a TV show in rapid succession.

Anime – a more popularized and short-form name for the style and technique of animation that originated in Japan.

OVA – stands for Original Video Animation; can be an stand-alone episode or an episode that continues a storyline from the main show.

Shounen – anime or manga made for young boys.

Shoujo – anime or manga made for young girls.

Mangaka – the author and creator of a Japanese comics or manga; usually addressed with the suffix ‘–sensei’.