STI Salutes Student of the Year 2014 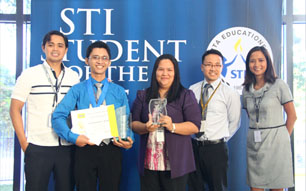 Five exceptional candidates from 80 STI campuses nationwide contended for this year's STI Student of the Year (SOY), held at STI Academic Center in Ortigas-Cainta on May 6, 2014 where Kevin Dexter Nipay of STI College - Global City emerged as the most outstanding model STIer to bring home the trophy. 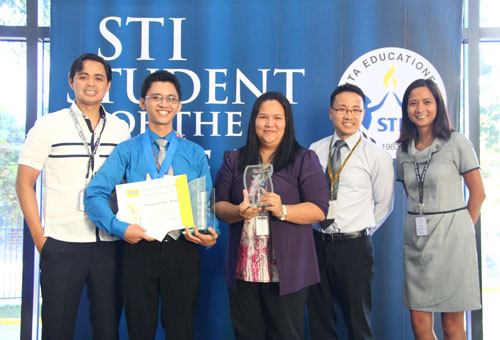 Kevin's long list of admirable qualifications has shown his strong inclination for good leadership as an officer for two school organizations, and for community service where he volunteered in several outreach programs. As a BSIT graduate, his aptness in information technology has earned him awards from numerous programming competitions.

His secret for his achievements is his untiring pursuit for improvement. Upholding the values and beliefs of STI, he shares that he believes in the Japanese word "Kaizen" which means "conquest for improvement or change for the best."

"It has a great impact to me when I heard it. I always ask myself 'Is there any improvement?' If the changes involved will be for the better, then it's good," he shares, humbly acknowledging that there is always room for him to grow.

Other notable STIers who qualified for the National Level screening are Kristoffer Gil Magahis of STI College-Balayan, Paul Eugene Mangahas of STI College-Quezon Avenue, and Mave Rick Manjares of STI College-Santa Rosa. All candidates went through a process of assessment which involved the Employability Skills Assessment (ESA), a panel interview, and processing of their academic, co-curricular, and extra-curricular experiences.

STI SOY is an annual award that recognizes the strong potentials of STIers who excel beyond expectations throughout their stay in college by demonstrating their proficiency in their programs of study, embodying effective leadership qualities, and having impressive accomplishments in both co-curricular and extra-curricular activities within and outside the STI academic community.