The annual search is on once again for the STI Student of the Year (STI SOY) 2014, chosen among the best students from all STI campuses nationwide. STIers with the potential to receive the much-coveted recognition are those who excel beyond expectations throughout their stay in college by proving themselves to be proficient in their programs of study, embody effective leadership qualities, and have impressive accomplishments in co-curricular and extra-curricular activities within and outside the STI academic community. 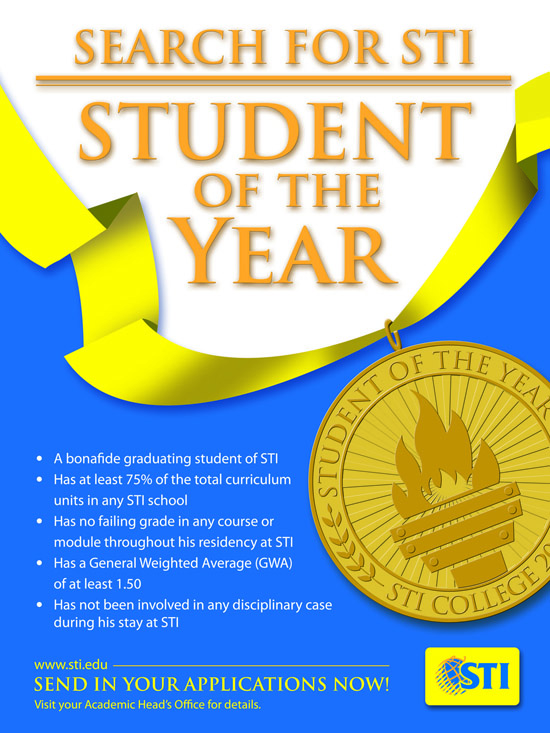 Nominations for the STI SOY award are now open. Nominees must be certified graduating students of STI enrolled in baccalaureate or pre-baccalaureate programs. There is also a requirement of at least 75% of the total curriculum units earned while maintaining a flawless grading report without a failing mark in any of the subjects or modules, a General Weighted Average (GWA) of at least 1.50, and good conduct with neither a minor nor a major recorded offense on the entire duration of their stay at their schools.

Nominees taking baccalaureate and pre-baccalaureate programs will be screened separately through a meticulous process during the School Level which will progress to the National Level, and the chosen students will also be awarded correspondingly.

The criteria to be considered for the selection are as follows:

Students who are interested in nominating a deserving STIer may freely approach the Academic Head in any of the STI campuses nationwide on or before April 4, 2014.

The STI SOY has recognized several outstanding graduates of STI for more than a decade, and aims to continually motivate all students to strive better and become excellent role models within and outside their classrooms.